A downloadable game for Windows

First of all, thank you for playing Lighthearted! And if you weren't planning to and are skimming this page, you should!

Lighthearted is a light space flying game, where you play as a shooting star and finding planets along the way. Avoid incoming meteors, and your friendly planets will keep your safe from anything coming through!

The game was made with Max (@thickspit_) who primarily worked on the programming on GameMaker: Studio, the music, and mechanics. In conjunction, I (@deroro_) did the art, game design, and story aspects.

The goal of this Ludum Dare is to create a game that contains either the "two button controls" or "growing" characteristic, or both! (Or neither, but that's kinda lame.) And we went with both. :]

As my very first game submission, he was friendly enough to let me upload the game on itch.io, while the Ludum Dare submission would be via his MediaFire. We've known each other for less than a week prior to the Ludum Dare 34 deadline. During that period, we got along extremely (and surprisingly) well, and he gave me valuable insight on what it takes to develop a game. While we saw others struggling to grapple with where to begin, Max and I bounced ideas endlessly, back and forth, for two hours. We ripped apart each other's ideas without taking offense to one another, which is probably the one thing I respect most about having him as a partner. Actually, we got along without any hitches at all, which was unexpected. After that, we looked at what we had and settled on the best idea we came up with and rolled with it. This is our result.

I've worked on games on my own in the past, but so far none of them have ever been released or completed. Lighthearted is far from perfect but we're as proud of it as we ever were, ever since we played the prototype on day 1 of Ludum Dare. It's that pride that wanted us to keep making it better and better. Both of us had skill barriers that had us feel the game might be on the short end of the stick, which had us wanting to improve the flaws that made it that way in the first place-- flaws that we didn't have the ability or time to fix. Keeping the scale small was difficult, but it's been done. It's not perfect, but we believe it's great and we think you'll believe so, too.

Special thanks to Amos (@fasterthanlime) for the itch.io support, and for posting an area for individuals to meet others prior to Ludum Dare. It was from this support that I was able to find and contact my partner, to which I have absolutely no regrets from doing. And thanks as well to Mike (@mikekasprzak) for creating a community (ie. Ludum Dare) where both veteran and clean-handed developers can gather together to make a ton of great things. You guys are awesome.

And one more sign of thanks to the community. Without you all, we wouldn't even have the opportunity to do something like this. We started with "I'm in", but now our game is out. :]

**Just found out about this (2 hours before Ludum Dare ends), but there's a meteor shower tonight! Perfect timing! Find out more here: http://solarsystem.nasa.gov/planets/geminids.cfm

Just run the app and it should be good to go! I think.

...I'm not great with computer advice.

You can vote for the game by clicking here. Whoooops. 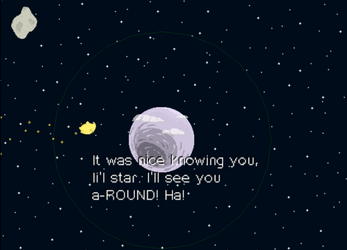 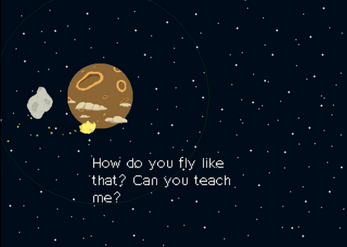 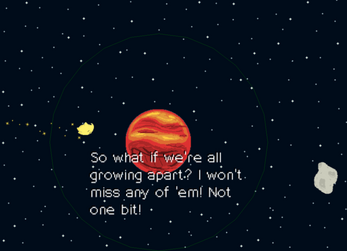 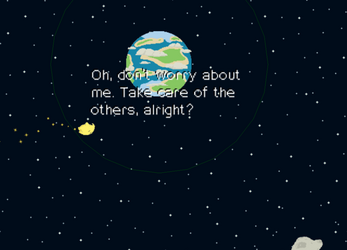 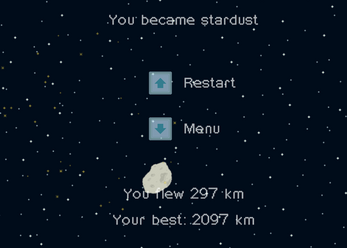